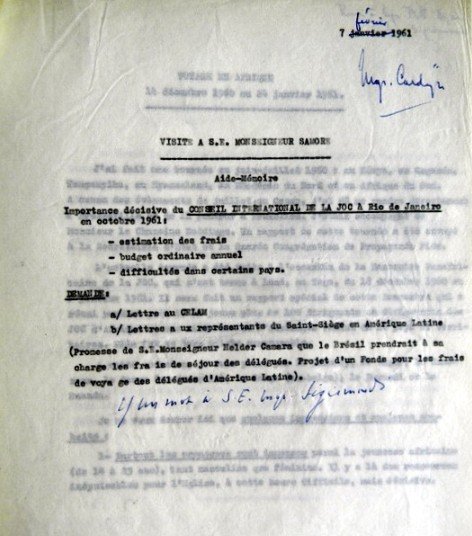 A day after his visit to Archbishop Dell’acqua, Cardijn had two more appointments.

The first was with the Secretary of the Congregation for the Propagation of the Faith, Archbishop Pietro Sigismondi, previously a Vatican diplomat and originally from Bergamo, the home diocese of Pope John XXIII.

The focus of this visit was the work of the JOC in Africa. As well as reporting on his trips to Africa, Cardijn thus sought Vatican assistance in placing the JOC “missionaries,” later called “extension workers,” whose task was to assist the development of the movement in the host countries.

Cardijn also insisted on the importance of the African JOC movements participating in the forthcoming Rio de Janeiro international council and he sought a grant for this purpose.

Cardijn’s second visit was to Archbishop Antonio Samoré, secretary of the Congregation for Extraordinary Ecclesiastical Affairs, effectively the Vatican’s foreign affairs office responsible for relations with other countries.

With the international council in Rio now less than a year away, Cardijn’s focus here was on Latin America. He requested a letter of support to be addressed to the Latin American bishops conference, CELAM, as well as further letters to Holy See representative offices all over Latin America.

He noted that Brazilian Bishop Helder Camara had committed to funding all hosting expenses for the international council but that a special fund had been created to finance the travel of other Latin American delegates to Brazil.

And a handwritten addition in Cardijn’s handwriting calls for a “word to HE Sigismondi.” Presumably, Cardijn wanted Samoré to add his support to Cardijn’s requests for aid to Africa as well.

All in all, another advocacy masterclass from Cardijn, in effect seeking to make Samoré and Sigismondi (and hence the Holy See) stakeholders in the development of the JOC in Africa and Latin America.