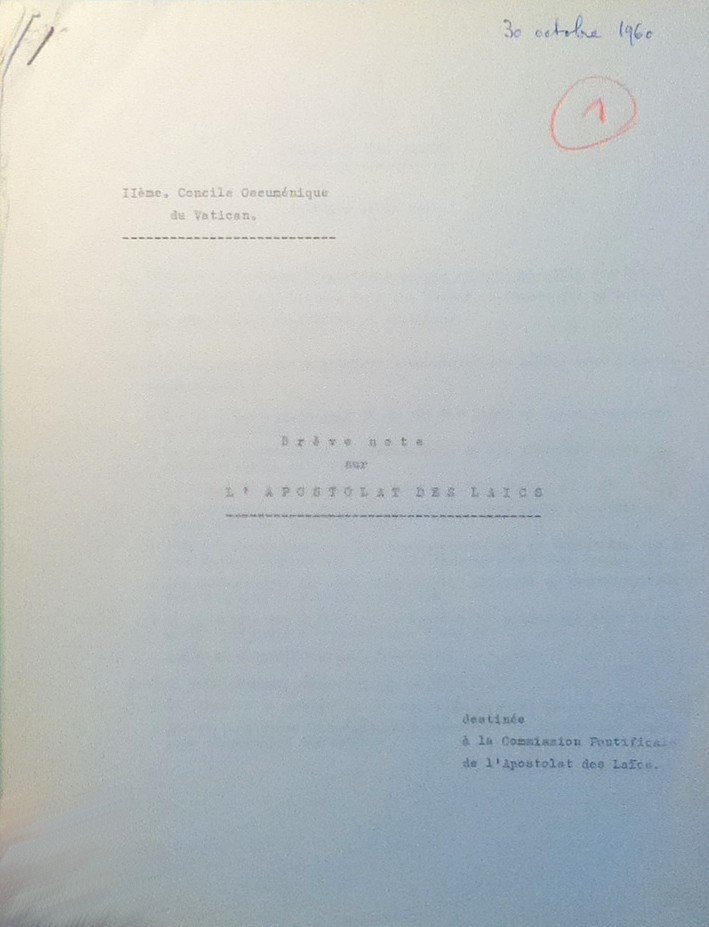 With the first plenary meeting of the Preparatory Commission on Lay Apostolate just over two weeks away, Cardijn has finalised an 18-page typed and roneoed note entitled “L’apostolat des laïcs” (The Apostolate of Lay People).

While there is no indication of the number of copies printed, no doubt he prepared enough for distribution to the members and consultants of the PCLA as well as for his other contacts in Rome and elsewhere.

Cardijn opens by summarising the document, which is organised into five chapters that follow the form of his see-judge-act method.

See: Chapter I (naturally!) thus opens with an overview of “the essential problems of lay life,” ranging from personal, physical, family, community and social level to cultural, professional, civic and political at national and international levels.

As illustrations of the issues, Cardijn highlights population growth, rapid technological change, the break down of traditional lifestyles as well as the growing power of government, non-government and international institutions.

Judge: He divides Chapter II into three parts, setting out his own vision of the required response by the Church:

a) The apostolic and missionary dimensions of these problems and their solution;

b) the indispensable formation required to solve them;

c) the role of the Church in providing that formation and working towards solutions.

Act: Cardijn final three chapters set out Cardijn’s conception of the action required by the Church:

a) Catholic Action (Chapter III), which Cardijn characterises as both a “participation” in the formational aspect of the Hierarchy’s role “forming the faithful to share the apostolic mission of the Church in their own life and in the lay world” but also involving “the responsibility of lay people both in the direction and in the action and organisation of the apostolic movements that have received a mandate” from the Church.

b) Pious, charitable and social organisations in the Church (Chapter IV), which Cardijn views as working alongside and complementing the work of the Catholic Action movements with their focus on formation.

c) Formation of priests and religious men and women (Chapter V) to take on the task of “the formation of lay people for the apostolate.”

b) proposing a post-conciliar “Roman Congregation or Dicastery for the Apostolate of Lay People,” which would continue and develop the work begun by the conciliar commission.

It was a masterful document that synthesised the essence of the Jocist-inspired “Specialised Catholic Action” model that Cardijn had developed over the previous forty years. Without a single mention of the “Italian” model of clerically-controlled, politically-oriented and Church-defending Catholic Action, Cardijn offered a completely different vision of Catholic Action led by lay people, focused on formation and reaching out to the world.

Such was the vision that would guide and inform all his work – and that of his jocist colleagues – over the course of work of the Preparatory Commission.