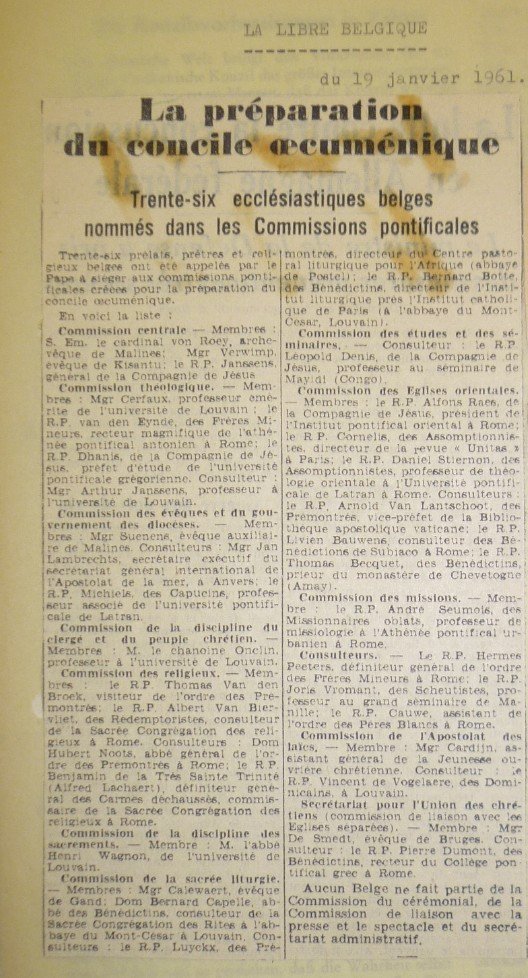 The Belgian paper, La Libre Belgique reported on 19 January 1961 that 36 Belgians, including of course Cardijn, had been appointed to the various preparatory commissions for the coming Second Vatican Council.

Others who were close to Cardijn, the JOC and/or other Specialised Catholic Action movements included:

Cardinal Jozef-Ernest Van Roey of Malines-Brussels, Cardijn’s own archbishop and a long-standing supporter, but now aged 87;

Bishop Emiel-Jozef De Smedt of Bruges, a dynamic young bishop (aged 52) who had worked with the VKAJ, the Flemish female JOC, and whose sister Livine, had been a fulltime worker for the VKAJ who had also helped launch the JOC in Germany;

Fr Bernard Botte osb, a Benedictine liturgist, who was prominent in the liturgical reform movement;

Fr Lucien Cerfaux, a Louvain theologian, New Testament scholar and expert in Paulinian theology, who had been advisor to Cardijn and the JOC during the late 1940s.

But others less sympathetic to Cardijn included the ambitious young auxiliary bishop of Malines-Brussels, Leon-Joseph Suenens.

A notable omission from the preparatory commissions was Mgr Gerard Philips, the Louvain theologian and author of an influential book Le rôle du laïcat dans l’Eglise, published in French in 1954, and in English as The Role of the Laity in the Church in 1955.

L’Osservatore Romano announced the appointments to the Commission on the Liturgy on 26 August 1960.

The Belgian Benedictine Bernard Botte OSB, who had also worked closely with the JOC, became a consultor.