At a press conference on 30 October, 1959, Cardinal Tardini officially announced that the Council would be called “Vatican II.”

The chief aim would be “to foster the growth of the Catholic faith, a healthy renewal of
the Christian people’s practice, and an updating of Church discipline according to the needs of the day.”

While it would be “an internal affair of the Catholic Church,” it would “represent so
marvelous a spectacle of truth, unity, and love as to constitute, even for those alienated from the Apostolic See, an invitation to seek and to achieve that unity to which many of them aspire.”

Whether non-Catholics would be invited as observers was a matter under discussion.
The preparations were well underway, Tardini reported.

Eighty per-cent of the residential bishops had already submitted recommendations, and it was likely to require a full three years of further work before the Council could meet. He expected that it would not be of long duration, both so that bishops would not be absent from their sees too long and because of the highly organized preparations.

“An immense correspondence with Bishops all over the world” was to be carried on prior to the Council to ensure that “we will already be agreed on many things by the time the Council meets,” Tardini noted. 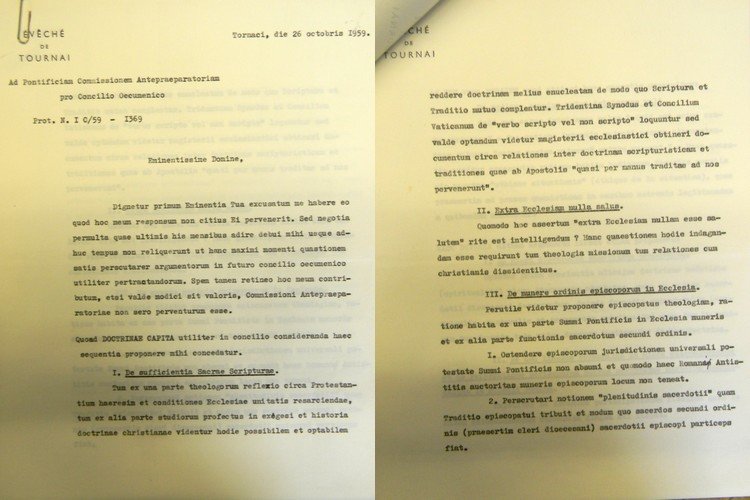 On 26 October 1959, Bishop Charles-Marie Himmer of Tournai, a long-standing proponent of the JOC and Specialised Catholic Action, wrote to Vatican Secretary of State, Cardinal DomenicTardini, with his reflections for the Ante-Preparatory Commission.

He first sought clarification on “moral” issues, particularly marital questions. He also raised the issue of using vernacular language in the mass and the use of more appropriate scriptural readings.

Finally, he sought clarification of the notion of Catholic Action, which had been under challenge in various quarters.

Rough translation based on Google