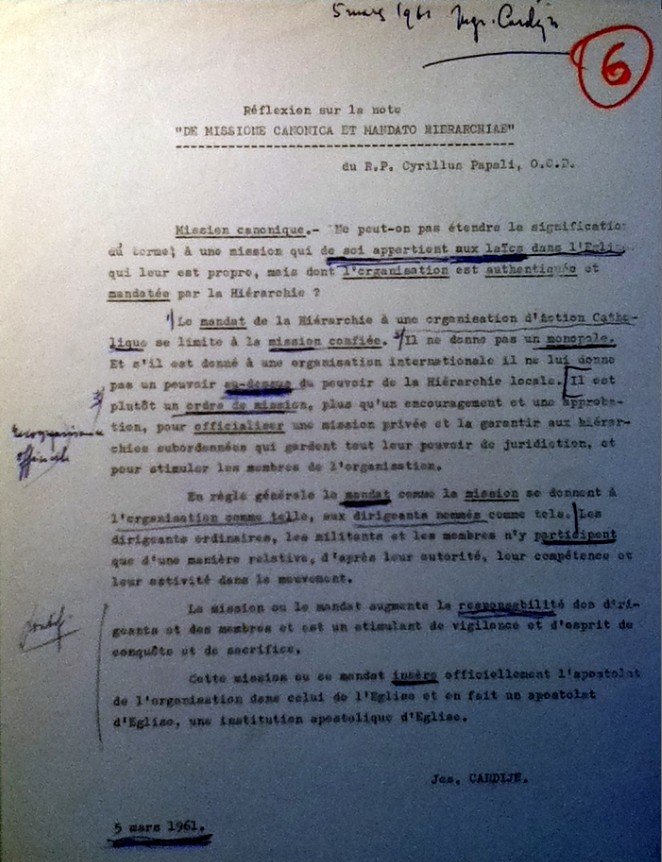 In this he sought to dispel some of the (many) misconceptions surrounding the meaning of “canonical mission” and “mandate” that were then in circulation and to present his own conception of how these terms applied to the JOC and other Specialised Catholic Action movements.

In relation to “canonical mission,” he asks: “Could the meaning of this term not be extended to a mission which of itself belongs to lay people in the Church, which is proper to them, but the organisation of which is mandated by the Hierarchy?”

In other words, lay people have a mission of their own without the need for any sort of superadded canonical mission. On the other hand, the term was applicable to organisations which had been mandated by the local bishop or bishops.

Secondly, he insisted that any hierarchical mandate granted to a Catholic Action organisation was limited to the “mission confided.”

“It does not give a monopoly, nor does it give an international organisation a power above the power of the local Hierarchy,” he insisted, repudiating the accusation made by then-Bishop Léon-Joseph Suenens of Brussels that the movements were seeking a monopoly.

Rather, ” it is more an order of mission, than an encouragement or an approval, in order to officialise a private mission and to guarantee it to the subordinated hierarchies, who maintain all their power of jurisdiction and to stimulate the members of the organisation,” Cardijn explained.

Nor was this a personal mandate.

“As a general rule, the mandate as the mission is given to the organisation as such; to the leaders named as such, the ordinary leaders, the leaders and members only participate in a relative manner, depending on their authority, their competency and their activity in the movement,” he continued.

“The mission or the mandate increases the responsibility of the leaders and members and is a stimulant to vigilance and the spirit of conquest and sacrifice.

As clear as Cardijn’s explanation was, it was not easily accepted by his opponents.