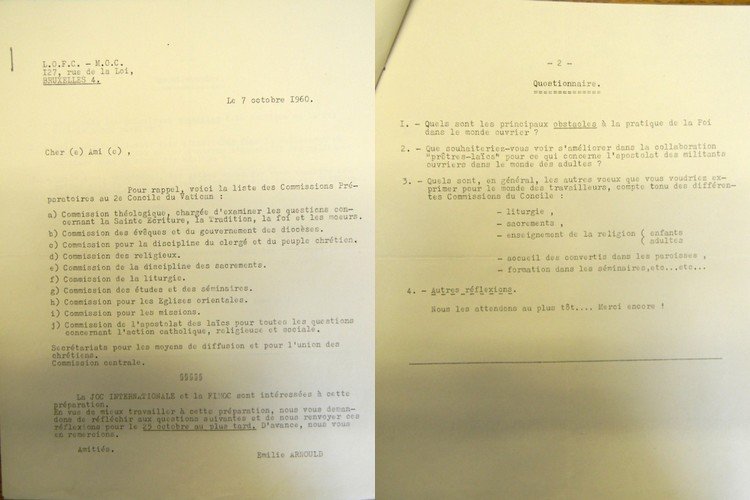 On 7 October 1960, Emilie Arnould, a former JOCF leader, wrote to members of the Ligues des Ouvrières Féminines Chrétiennes (Christian Women Workers League) and of the Mouvement des Ouvriers Chrétiens (Christian Workers Movement) to invite them to respond to a questionnaire in preparation for Vatican II.

“1. What are the principal obstacles to the practice of the faith?

2. What would you like to se improved in the collaboration between “priests and lay people” with respect to the apostolate of worker militants in the adult world?

3. In general, what are the other wishes that you would like to express regarding the world of workers, taking into consideration the various Conciliar Commissions:

A day after meeting with the JOC, ACO and the FIMOC, Cardijn wrote on 27 September 1960 to Mgr Achille Glorieux, who had been appointed secretary to the new PCLA.

“We met in Paris yesterday with the leaders of the ACO, FIMOC and JOC Internationale to examine the possibility of international collaboration. We also considered how each movement itself and all together we could do useful work by sending to the Lay Apostolate Commission and even to other commissions one or more documents proposing a study of certain issues and experiences of solution in the field of the worker apostolate, both young and adult.

“During our discussions, we even asked if we could not propose the creation of a sub-commission comprising lay leaders and militants to submit to the Pontifical Commission their point of view, experiences as well as the wishes of the lay apostles themselves with respect to the apostolate to which they had devoted their whole lives.

“This sub-commission could work at international level or diversify into continental sub-commissions, which would examine the issue from an even more realistic perspective on a continent by continent basis.

“The issue of the worker apostolate seems to me to be so important within the ensemble of issues of the lay apostolate that I do not hesitate to ask you if it would be opportune to make such a proposal.

“If you could consult His Eminence Cardinal Cento on this subject, you could then suggest to use the right attitude to take. I am ready myself to come and speak with His Eminence if he judges it opportune.

“This collaboration of the laity themselves in the preparation of the coming Ecumenical Council seems highly opportune to me at the moment when the World Council of Churches in Geneva is preparing its own World Congress in New Delhi next year on the theme “Christ, Light of the World” and has issued an enthusiastic call to the faithful of all faiths, as well as at a time when Moral Rearmament has redoubled its activity in Africa with all African parties as well moreover will all people of colour,” Cardijn wrote. 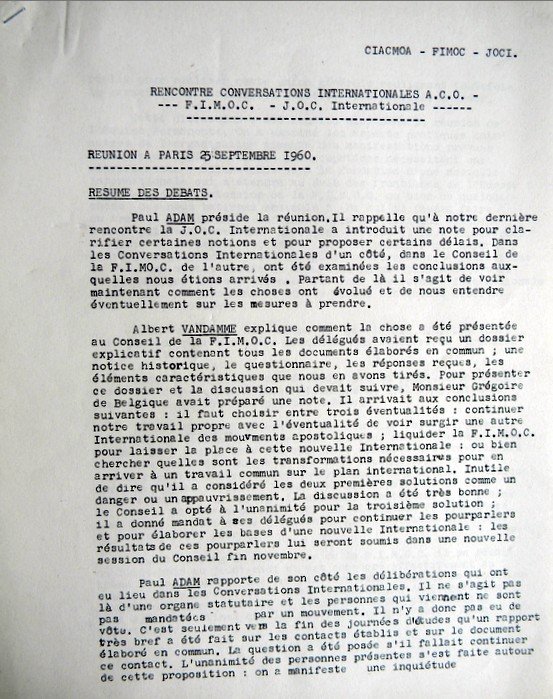 The three movements had been in contact and “conversation” since 1958. Discussions were under way about the possibility and the desirability of uniting the ACO, the member movements of the FIMOC and other JOC-inspired Christian Worker movements around the world in a broader international movement that would take the place of the FIMOC.

In 1920, Dutch and Italian Christian democrats proposed to the Belgian Federation of Worker Leagues (Fédération des Ligues Ouvrières) the creation of an international structure.

Conferences in Cologne in 1929 and in Utrecht in 1931 and 1934 led to the creation of an “Association internationale sociale chrétienne” which brought together employers, workers groups, farmers groups and middle class (professional) groups.

According to Jacques Meert, eventually, only the worker wing remained. After World War II, a Swiss initiative sought to revive this leading to a first European meeting in 1948.

This led in 1952 to the foundation of the Fédération internationale des mouvements ouvriers catholiques.

Since then the ACO in France had also emerged as a Specialised Catholic Action movement but which was not part of the FIMOC.

This led eventually to discussion of the creation of a new international movement bringing together the various strands of the Christian worker movement.

Celebration of the 70th anniversary of Rerum Novarum

In the short term, however, the meeting looked into a proposal to celebrate the 70th anniversary of Pope Leo XIII’s encyclical Rerum Novarum, which was due in May 1961, with an event that would take place in Rome coinciding with the anniversary.