In his April 1961 Note 9 prosaically entitled “Reflections on documents Pr. 11 – 12 – 13 – 14 (SC II),” Cardijn once again diplomatically calls into question the whole approach of the Prep Com on Lay Apostolate.

“Isn’t it necessary,” he asked, “to try to define more precisely:

“Christian animation of the temporal order?

“Social Action and Catholic Action in the temporal order, life and the environment (milieu)?

“The relationship between this animation with the Hierarchy?

“The supernatural raising up of temporal activities?”

In effect, Cardijn was challenging the assumed spiritual-temporal framework that the Commission appeared to be adopting.

Offering the JOC as an example, he insisted that a more holistic approach was required.

“Since its foundation, the YCW has specialised in the training of young workers with a view to the Christian animation and supernatural raising up of social action,” Cardijn continued, noting that the YCW had “formed social leaders for all the various milieux and all the problems of temporal life.”

It had “always affirmed itself as Catholic Action” and had been “praised and recommended as such by Pius XI, Pius XII and John XXIII.”

Moreover, “the YCW works closely with private and public, national and international, Christian and non-Christian organisations and institutions in all areas of the temporal and social order.”

And he concluded with the pointed question as to whether “the 2nd Sub-Commission, which is devoted to social action” was “taking this activity of the YCW into account.” 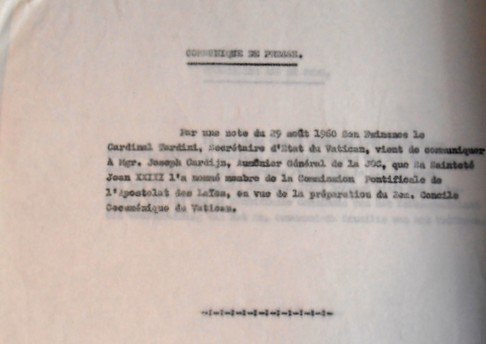 After being informed of his appointment to the Pontifical (Preparatory) Commission on Lay Apostolate, Cardijn announced it in a press release drafted in all likelihood by Marguerite Fiévez.