Cardijn introduced the discussion at the special meeting of several members of the JOCI Executive Committee on 28 October 1960.

Unsurprisingly, he began by insisting on the “necessity of the worker apostolate” and recalling Pius XI’s statement that the first apostles of workers needed to be “the workers themselves.”

Workers thus needed to act themselves to solve “the problem of the worker world,” he said.

Begin with our experience as clergy and laity

JOCI vice-president, Maria Meersman, added that it was necessary to “begin with our experience” as “clergy and laity.”

Evidently referring to certain documents, JOCI secretary-general René Salanne noted that “we find ourselves before an amalgam of definitions.” The JOC, however, “began from problems,” he added. And there was a problem of “young people caught up in industrial evolution” who needed to be able to “accomplish their complete destiny,” he explained.

French priest, Jean Noddings, who had many years of experience working with the JOC in West Africa, warned that young workers could not be reached through “general pastoral approach.” By the nature of their environment they were unable to be reached this way, he continued.

Canadian Holy Cross Father, Oscar Mélanson, who also had many years of experience with the JOC in Brazil, agreed, noting that young worker militants remained at the “margins of the Church.”

Also Canadian, JOCI president, Romeo Maione, warned that the Church in many countries was making the same mistakes that it had made during the industrial revolution in Europe. The Church’s mode of evangelisation was designed for a “static world” or a “village church” rather than in view of the “new civilisation” that was emerging.

Summarising, Cardijn noted that many countries were still at the beginning of the industrialisation process and young workers, even those who had been baptised, were not being reached by the Church, let alone those of other religions.

Young people were not being formed to recognise the “value of their work” or “their personal dignity” or to address their problems, he noted.

René Salanne added that these were not just problems of young workers but “life problems.” Hence, the need to give meaning to life as “the Creator desired.”

Romeo Maione noted that the Church and others continued to start from “ideas” and thus “intellectualised Christ’s message.”

People needed “to learn from life,” he stated, warning that the masses did not learn “from courses.”

Fr Noddings agreed, noting a growing popularisation of “catechetics” rather than beginning with life.

“The priest who enters the seminary at age eighteen has not observed life before entering,” Maione warned, “And afterwards he is outside of life.”

Meersman added that it was necessary to “make the act of faith beginning with the action of the Holy Spirit in the life of people and events.”

Assistant international chaplain, Marcel Uylenbroeck, noted the need to “list the various problems,” including starting work at an early age, which was a cause of “dehumanisation” and hence also “dechristianisation.” He also noted the need to deal with communism on a “positive” basis.

Fr Mélanson added that it was necessary for the Council to develop “an anguish about the workers” and to develop a “humanism” that would save the masses.

Betty Villa from the Philippines noted that a critique of the YCW in Hong Kong was that it did not “help the parish,” e.g. with catechetics. In other words, the work of the YCW was not understood. She added that there was no link between the Gospel preached on Sundays and daily life. Hence, young workers did not know how to act.

Fr Noddings added that if priests really understood Catholic Action (in the JOC sense), they would do catechetics quite differently.

Maione added that the Council needed to make an option in favour of a “specialised” apostolate, a specialisation based on “realities” rather than “class.”

Fr Mélanson pointed to the problems of developing countries and the associated “frightening” issue of “urbanisation.”

Cardijn added that work had been “robbed of its meaning” and the need to give it a new community-based meaning. He noted that young people had a strong “democratic” sense to the point of being ready to die.

René Salanne noted that Quadragesimo Anno was outdated and suggested that perhaps a new encyclical was needed every five years.

Cardijn suggested that the Council needed to create a new Secretariat for engaging with non-Christians and perhaps for a new Congregation to study the problems of lay people in the Church. 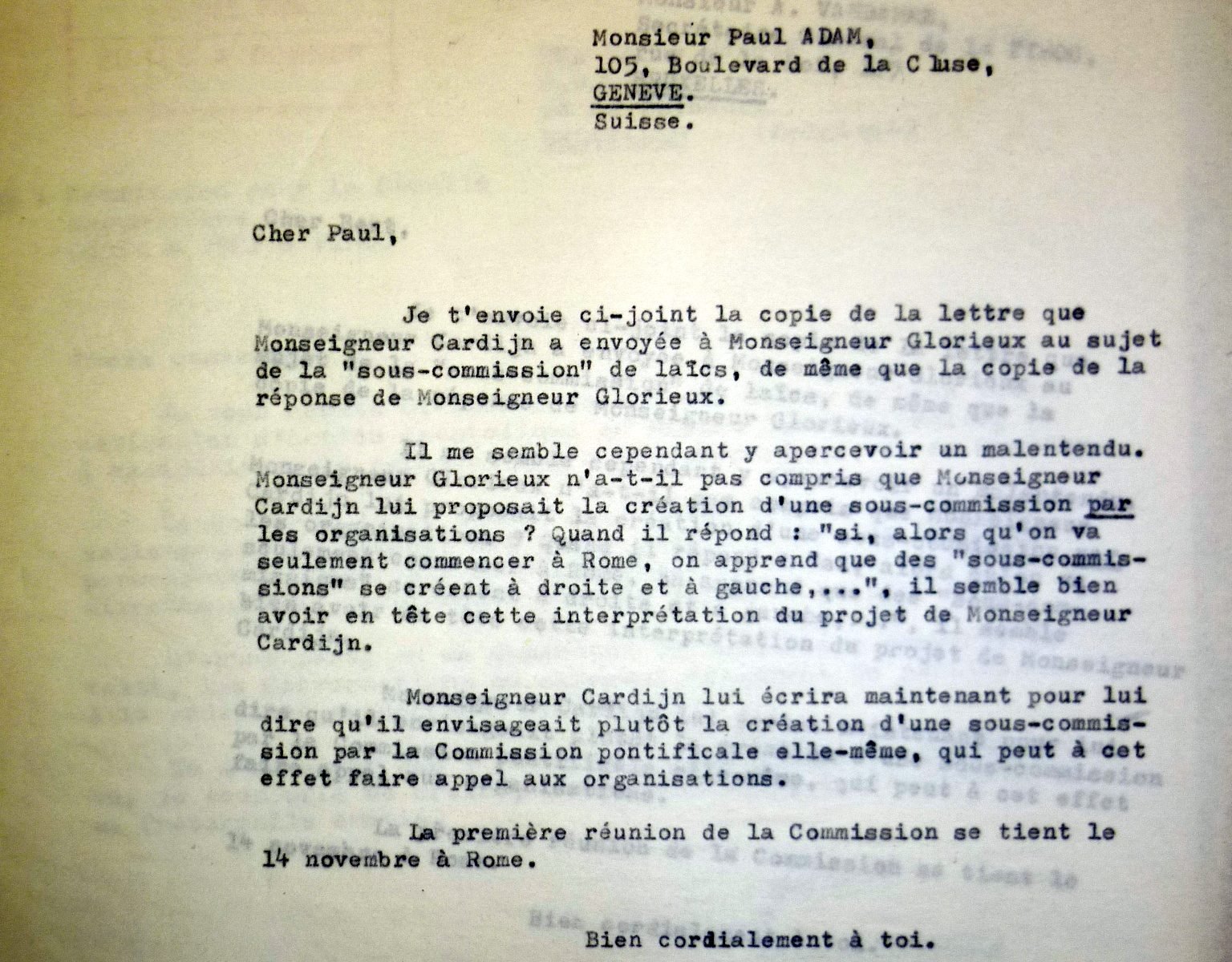 Mgr Glorieux’s reply to Cardijn on 3 October was clearly not the one that was expected.

“However, it seems to me that there was a misunderstanding. Didn’t Mgr Glorieux understand that Mgr Cardijn was proposing the creation of a sub-commission by the organisations.

“When he responds ‘if while they are going to start only in Rome, they learn that “sub-commissions” are being created left and right’, then he seems to have such an interpretation of Mgr Cardijn’s project in his head.

“Mgr Cardijn will now write to him to say that he actually envisaged the creation of a sub-commission by the pontifical Commission itself, which could in fact call on other organisations,” he wrote. However, at this stage, I have found no record in either the IYCW or the Cardijn Archives of any response by him to Mgr Glorieux.

“The first meeting of the Commission will take place in Rome on 14 November,” René Salanne noted. It promised to be an interesting meeting!