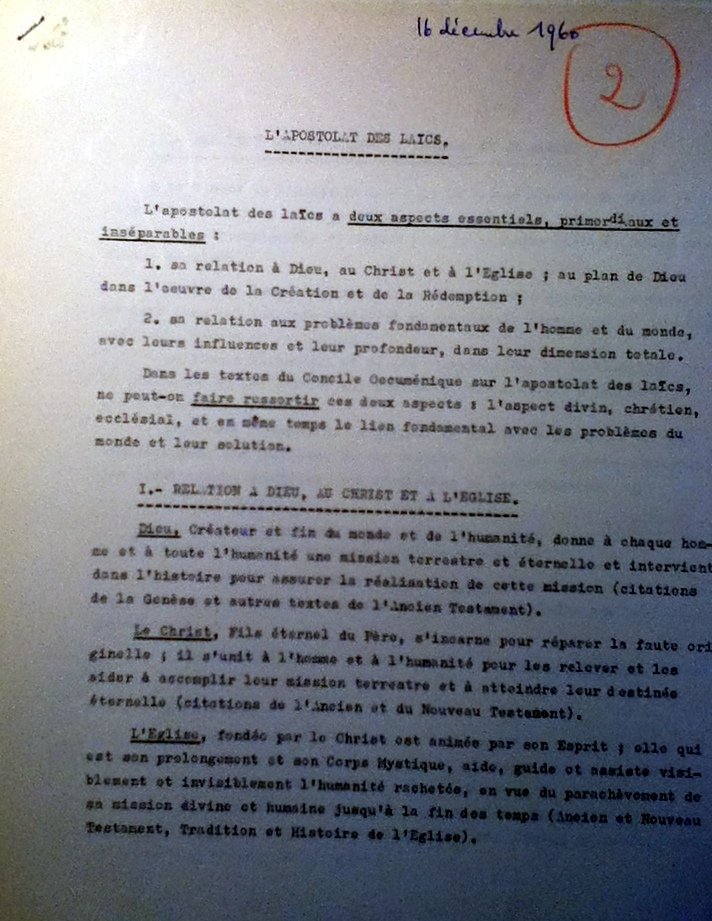 Having responded to the proposed plan of work of the Preparatory Commission on Lay Apostolate in Note 3 “Reflections and suggestions”, Cardijn now drafts another document, Note 2, entitled “The apostolate of lay people.” Freed from his shackles, he summarises in a single elegant page his own vision not only for the Commission but for the Council as a whole.

“The apostolate of lay people has two essential, primordial and inseparable aspects:

1. Its relationship with God, Christ and the Church; with the plan of God in the work of Creation and Redemption.

2. Its relationship with the fundamental problems of man and the world, with their influences and their depth, in their total dimension.”

“In the texts of the Ecumenical Council on the apostolate of lay people,” Cardijn asks, can one not bring out these two aspects: the divine, Christian, ecclesial, and at the same time the fundamental link with the problems of the world and their solution.”

Simply put, Cardijn is proposing that the Council organising its work around two poles: God, Christ and the Church on one hand and humankind and the world on the other.

He goes on to detail these two poles and the indissoluble link between them in terms that can scarcely be summarised or improved upon:

I. RELATIONSHIP WITH GOD, CHRIST AND THE CHURCH

God, Creator and end of the world and of humanity, has given to each person and to the whole of humanity a terrestrial and eternal mission and intervenes in history to ensure the realisation of this mission (citations from Genesis and other texts of the Old Testament).

Christ, Eternal Son of the Father, became incarnate to repair original sin; it is a matter of man and humanity to raise them up and assist them to accomplish their terrestrial mission and achieve their eternal destiny (citations from the Old and New Testaments).

The Church, founded by Christ is animated with his Spirit; it is extension of him and his Mystical Body, visibly and invisibly helps, guides and assists bought back humanity in view of the achievement of its divine and human mission until the end of time (Old and New Testament, Tradition and History of the Church).

II. RELATIONSHIP WITH PROBLEMS OF MAN AND THE WORLD

At this moment of history that is witnessing the transformation of the world in view of its humanisation, the apostolate of lay people is more important, necessary, irreplaceable and urgent than ever for the Christian solution of worldly problems.

One cannot insist enough on the indissoluble link that makes these complementary aspects of the apostolate of lay people an inseparable reality.

The link, the unity between the two aspects and the following consequences:

b) On the other hand:

All the other consequences of action, adaptation, specialisation and organisation of the apostolate of lay people flow from this double aspect and from the global dimension of the problems. Among others are the following:

1. the character simultaneously social, cultural and representative of apostolic organisations from the local to the international level

2. the indissoluble link between formation, action and organisation in view of the apostolate;

3. the specialisation and coordination necessary for the effectiveness both of their action and their representation;

4. the participation of Christians in the battle against the great human scourges: hunger, sickness, social insecurity, illiteracy.

The diverse consequences, far from being the result of an arbitrary will, are increasingly demanded by the complexity of the present world and the apostolic task that each Christian must fulfil.”

A proposed program for the Council

This is in effect Cardijn’s proposed plan of work not just for the Prep Com on Lay Apostolate but for the whole Council itself.

“The whole world expects much of the Ecumenical Council in every field and for every problem.

“It would be a bitter disappointment if these various fields and problems were not clearly mentioned and targeted by the Council, particularly those that concern the apostolate of lay people.

“On the other hand it could be an opportunity to provoke a truly salutary shock to world opinion if these problems were mentioned. A call for an effective solution, launched by the most representative assembly of the Universal Church, would trigger an awakening of influence with incalculable repercussions.

“Today, young people in general – and young workers in particular as well the vast throng of workers; the under-developed continents as well as the most sprawling cities; the most advanced peoples as well as the most dynamic groups representing science and ideologies, are on alert for and looking out for a sincere and profound solution.

“May the Ecumenical Council bring its Light and Hope to those who have such a great need for it!