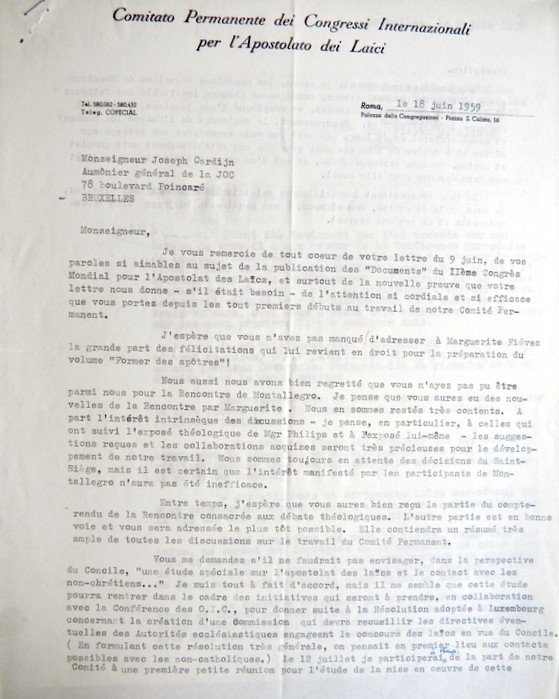 On 18 June 1859, Rosemary Goldie responded to Cardijn, expressing regret that Cardijn was unable to join the COPECIAL meeting in Montallegro.

“I think you will have heard from Marguerite (Fiévez) about it,” she wrote. “We were very pleased with it. Apart from the intrinsic interest of the discussions – I am thinking, in particular, of those which followed Monsignor (Gerard) Philips’ theological presentation and of the presentation itself – the suggestions received and the collaborations acquired will be very valuable for the development of our work…

Gerard Philips was of course the Belgian theologian, who had published extensively on the theology of the laity, albeit not completely in the Cardijn line.

“In the meantime, I hope you have received the section of the meeting report devoted to theological discussion. The other part is well under way and will be sent to you as soon as possible. It will contain a very comprehensive summary of all the discussions on the work of the Permanent Committee.

“You asked me whether, from the perspective of the Council, we should not consider, “a special study on the apostolate of the laity and contact with non-Christians,” Goldie continued, responding to the concerns expressed by Cardijn.

“I completely agree, but seems to me that this study could fall within the framework of the initiatives that will be undertaken, in collaboration with the ICO Conference, to follow up the Resolution adopted in Luxembourg concerning the creation of a Commission which will have to look to any directives from the ecclesiastical authorities. engaging the help of the laity in view of the Council. (In formulating this very general resolution, possible contacts with non-Catholics were indeed considered.)

“On 12 July, I will participate on behalf of our Committee, in a first small meeting in Paris to study the implementation. of this Resolution,” Goldie concluded. 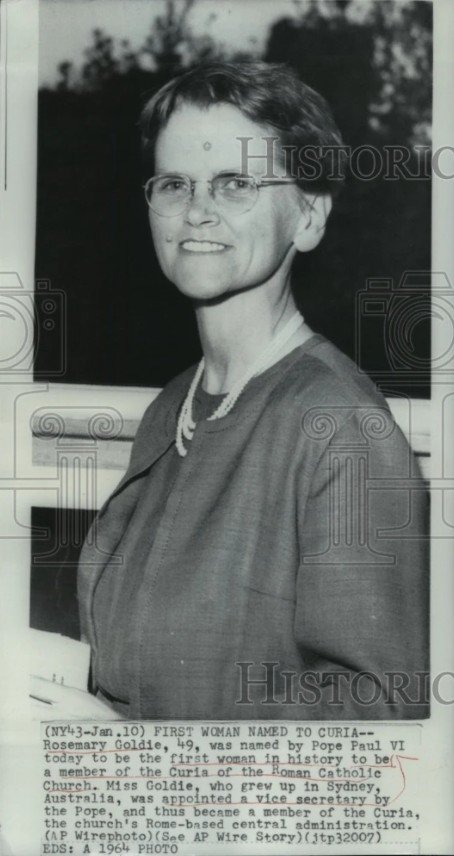 On 9 June 1959, Cardijn wrote to Rosemary Goldie, an Australian who had studied theology in Paris who was now working at the COPECIAL secretariat in Rome, to thank and congratulate her on the publication of the three volume proceedings of the Second World Congress on Lay Apostolate in 1957.

But, as always, Cardijn also took the opportunity to raise other issues, particularly formation for the lay apostolate for both priests and lay people.

“The leaders of the Permanent Committee know how much I am concerned with the formation of lay people for the apostolate; essential formation

“As long as all clergy, like all laity, fail to be imbued with the need for this formation and do not seek to adapt it, especially to the life problems of young adults, I fear that an effective response will not be given. to the predominant needs of the modern world,” Cardijn wrote.

“I ardently hope that the Permanent Committee will continue and extend its research on the formation of an authentic Christian laity, to the dimension of this world which is expanding in all fields. With respect to this, would it not be the moment to do a special study on the apostolate of the laity and contact with non-Christians, the union of Churches, etc.?

“I believe that this is an important aspect of the ecumenism issue and for the preparation of the Council,” he concluded, showing that preparation for Vatican II was already becoming a key concern.